Ok, so here are the basics: there are 28 letters in the Arabic alphabet, each representing a distinct sound. So far so good: that’s only two more letters than in the English language. But, there are some crucial differences between our script and the Arabic script.

First: Arabic is written from right to left whereas English (and other Western languages) are written from left to right. This might be difficult to get used to at first, but it’s actually not that hard after some practice. Don’t be surprised if you catch yourself trying to read English from right to left after a few hours of reading practice in Arabic

Third: Arabic letters change their shape according to their position relative to neighbouring letters in the word. However, this is not altogether foreign to English – in cursive writing by hand, our letters too undergo a certain degree of mutation to connect to the adjoining letters. The crucial insight that you have to grasp to master this aspect of the Arabic alphabet is to understand why the Arabic letters change their shapes when they are connected to other Arabic letters.

The shapes of other letters change for similar reasons.

Fourth: The Arabic alphabet contains a number of sounds that are not found in English. These sounds might be quite troubling for beginning Arabic learners, but once mastered they can be a great source of pride. The difficult Arabic sounds are qaaf, 3ayn, ghayn, raa, Taa, Daad, Saad, Zaa, Haa, khaa’.

Please check out my effortless magic key to the Arabic alphabet here.

Below is a table that shows all the letters of the Arabic alphabet in their various forms and their sounds: 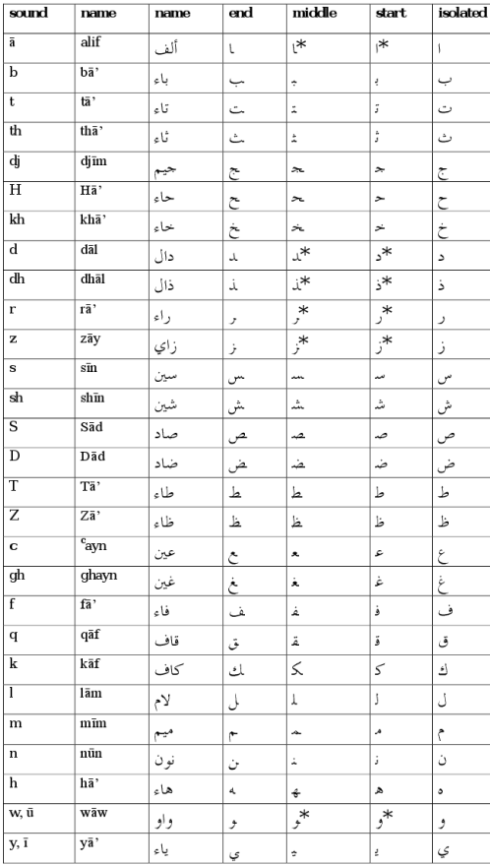 The letters marked with an asterisk (*) do not connect to the left.

Do you want to learn the Arabic alphabet and writing system without having to copy out by hand each individual letter hundreds of times? Then, check out my effortless method here.