Today I received another request for a translation of a few English phrases into Arabic for the purpose of an Arabic tattoo:

I have been reading your blog from australia and its fantastic, i really enjoy it. I noticed that you did a translation for one of your readers. I was wondering whether you could do the same for me. I would really love to learn Arabic but am a bit flat out right now, but its something i would love to learn one day. I have been through a rough time lately and i want to get a tattoo (in my favourite language Arabic) to symbolise this.

The words i would love you to translate are;

From strength comes courage
Never give up
Unbreakable
My family, my heart, whom I love and cherish, I will protect forever

I hope thats not too much to ask

Unfortunately I’m rather busy currently, so I can only translate a selection this time. Hope you understand Millie.

There are a few ways of saying this. I’ll try to make the nuances as clear as possible.

Literally, this translates as “no (you-)surrender”, i.e. “don’t surrender”. Coincidentally, the verb استسلم(istaslama) has the same root as the word Islam.

Here is the Arabic phrase in three different fonts:

This is essentially the same version as in (1), with the addition of the word أبدا (abadan) which means “never”. So this would translate as “never surrender”.

Below is this sentence formatted in three different fonts and saved as a picture in case your PC mixes up the Arabic letters: 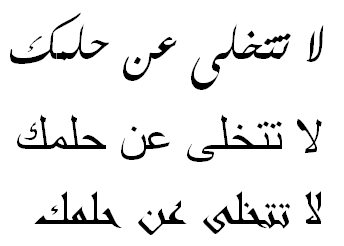 "Don't abandon your dream" in Arabic 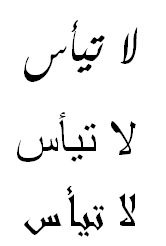 The same as in (4), but with the addition of the word word أبدا (abadan) which means “never”. So this would translate as “never despair”.

In Arabic this concept cannot be captured in one word. The best approximation would be لا ينكسر (la yankasir), which literally translates as “no (it-)break”, or “it doesn’t break”.

It would certainly look odd to just have لا ينكسر (la yankasir) on its own as a tattoo, since everyone would ask themselves just what doesn’t break. So you’d have to think of a slightly longer phrase. For example, الحب الصادق لا ينكسر (al-Hubb aS-Saadiq la yankasir), which would be translated as “true love doesn’t break” or “true love is unbreakable”. 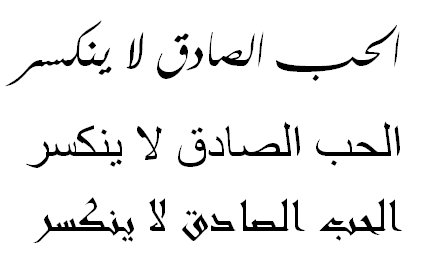 "True love is unbreakable" in Arabic

If the two words are chosen as a tattoo it would be best to precede them with the article ال (al), so that would result in القوة (al-quuwa) and الشجاعة (ash-shajaa3a). 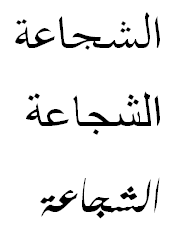 I hope this helps you Millie!

189 thoughts on “Arabic Tattoos – Another Reader Request: never give up, unbreakable, strength and courage”