Danielle, a reader of this blog, asks for the following Arabic tattoo translation:

Hi Max,
[…]
i’m hopeing you can translate the following:
“have strength and live this life”
this would be mental strength, and to live… have experiances rather than to just exist.
I really do hope you can help me and I thank you in advance for you time.
kind regards
danielle

I’m happy to oblige. I give my translation and the reasoning behind it below. Let’s start with the first part:

The phrase “have strength” is best translated as كن قوياً (pronounced kun qawweeyan), which literally means “be strong”. The word قوي (strong) can refer to both physical and mental strength.

However, in Arabic the verb and the adjective both change according to whether the imperative (be sstrong!) is addressed to a man or a woman. Since you are a woman (judging from your name) I assume you would want to address yourself. So here is the same phrase “be strong” addressed to a woman: 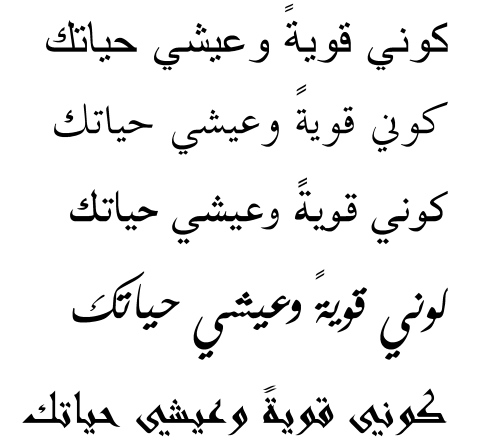 Arabic Tattoo: Be Strong And Live Your Life (addressed to a woman)

By the way, the two lines (//) above the last letter of the second word from the right are not really necessary and if you prefer you can remove them if you think the tattoo would look better without them. They merely indicate that the word takes the accusative case, but it’s not really required to indicate this in writing…

Let me know what you think of the design. I hope you like it.

80 thoughts on “Have Strength And Live This Life Tattoo Design”