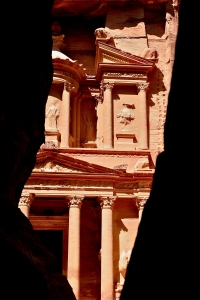 The Treasure House in Petra, Jordan

Yesterday I watched a show called “Hidden Talent” on Channel 4 that used a “Modern Language Aptitude” test on 100 randomly selected individuals who had no prior language learning experience other than at school. The five individuals who scored highest on this test were then given a second test: they were taught a few phrases in Turkish for one day and then had to work in a Turkish restaurant in London, serving customers in Turkish.

The guy who did best on this test was trained for five months in Arabic intensive courses, of which he spent six weeks living in Jordan attending classes there and living with a Jordanian host family.

After all this, he was invited to Jordanian breakfast TV where he was interviewed in Arabic and did quite well answering relatively basic questions (“why have you come to Jordan”, “why did you choose to learn Arabic”, etc.).

Shortcomings of the programme

My gripe with the programme is that they made it seem as though the guy who was selected was somehow unusually talented in learning a foreign language, but I have met many individuals who were able to reach his level in Arabic after a few months of intensive training. It is not unusual to reach a good level of fluency after five months of doing nothing but learning the language. And while the chap did pretty well, I want to emphasise that the programme merely showed that generally anyone can do it with the right dedication and the right environment.

The programme also had various “experts” present who helped in initially selecting the person with the hidden language learning talent. Maybe it’s due to the way their comments were cut, but I found my way disagreeing with a lot of what they said.

There was the major from the British defence language school who was showing Ebbinghaus’s curve of forgetting to his students. While nothing is wrong with the curve itself, I question its applicability to language learning. Ebbinghaus developed this curve after learning nonsense made-up words and measuring how long he would be able to retain them in his memory. Language learning is much different, insofar as words can be learned in context and have actual meanings and similarities.

I can’t recall which of the experts said this, but one of them claimed that it was all about pronunciation. Now, while pronunciation is certainly quite important, it’s not the holy grail of fluency. As long as you can pronounce the individual sounds of the foreign language reasonably well and – more importantly – have a good grasp of the sentence melody, you’ll be able to be understood and won’t sound too unpleasant to a native speaker’s ears.

The importance of immersion

An interesting point in the programme was when the guy had been learning Arabic for two months and was asked to appear on an Arabic radio show hosted in London. He did not make a good impression, not being able to answer relatively simple questions. It seems to me that (from the few shots of his actual learning methods) that he relied too heavily on rote memorisation of words devoid of context. When he appeared on the Jordanian TV show three months later he was much better, not only because he had had more time to learn the language, but also because he had by that point been immersed in Arabic in context for six weeks.

I would say that immersion is the single most crucial factor of success in foreign language learning. If you can’t make it to Jordan, you can still re-create a lot of an Arabic-speaking environment at home, e.g. reading Arabic websites, listening to Arabic music and watching Arabic TV. In the end, I strongly believe that the majority of people can learn Arabic to a good standard with the right tools and motivation. Who knows, maybe now it’s your time to discover that your hidden talent is Arabic.