Over the last 14 days or so I’ve received quite a few Arabic tattoo translation requests. I was too busy to answer them immediately, but I have not forgotten about them. Here they are…

By the way, if you’re really serious about learning Arabic yourself, then why not start with my easy method for the Arabic alphabet?

I’m dying to get a tattoo and would like something in arabic as i love the beauty of the script…I’ve been looking for someone to translate ‘inner strength’ or a nearest possible translation and I wondered if you may be able to help me as you seem to know what your talking about?! Could you also please translate my name and my star sign, Libra, please? 😀 Im a bit paranoid of ending up with something incorrect and can’t decide which one to go with!

Thank you so much! 😀

The concept of “inner strength” would be القوة الداخلية (al-quwwa ad-daakhileeya). Google seems to agree with my translation, insofar as there are more than 38,000 matches for this exact phrase used in meaningful contexts. Literally this translates as “the-strength the-inner”. Below are five different designs (fonts) for this Arabic phrase. 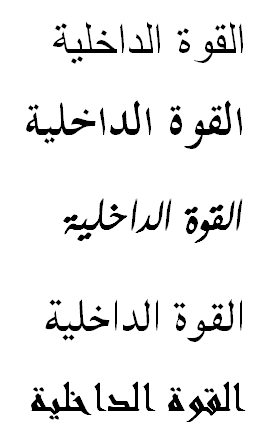 Alternatively, one could opt for something closer to “spiritual strength”, which would be القوة الروحية (al-quwwa ar-rooHeeya). Literally, “the-strength the-spiritual”, where الروح (ar-rooH) refers to the soul. Google results for this phrase are more than 43,000 – so, also commonly used. 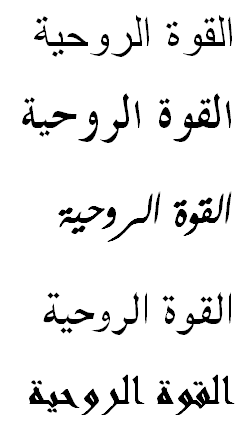 Your name transcribed into Arabic would be جوان (djoo-an). However, this looks exactly like the Persian word for “young” – جوان (javân). Perhaps that might be cool to have, a tattoo in Arabic script that can be read as both your name (in Arabic) and as “young” (in Persian).

hi max, I want a tattoo in arabic but I dont want any mistakes and I really like your blog
I was wondering if you could send me the following words in arabic in a very simple font

and my name
RENATA

( I am still trying to decide wich one, so please make it separated) thankyou so much

Karma is a concept that is not widely-used in the Arab World. The best translation is simply كارما (kaarma).

The Arabic for “peace” is سلام (salaam). However, peace as an abstract concept would be “the peace” in Arabic, which is السلام (as-salaam).

hi my name is abe, im interested in getting a tattoo but i want to
make sure i know what im going to get tattooed on me is. can you help
me out with these simple questions;
1. what kind of dialect from the arabic language is most commonly used
on tattoos?
2. what is the correct way to spell these two phrases; 1. God and
Faith 2. Ambition
3. also, i’ve seen these tattos written vertically, one letter under
the other, which means they are not connected, does that mean they are
wrong?

1. Most of the Arabic tattoos I’ve seen are in Modern Standard Arabic. However, I’ve also seen some in the Egyptian and Lebanese dialects.

2. “God and faith” would be الله والإيمان (allah wal-imaan). Note that الله (allah) refers to God in all three monotheistic religions (Jewish, Christian or Muslim). 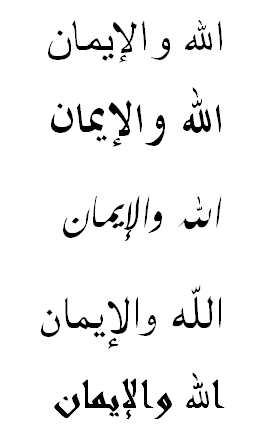 3. Writing Arabic vertically, with disconnected letters is not necessarily wrong, but perhaps not as aesthetically pleasing as horizontal writing, where all letters can be connected. Very rarely you do see vertical writing with disconnected letters in the Arab World. But this is an exception, for example on the rare billboard/shop sign. Generally, if you really wish to have a vertical tattoo in Arabic, why not turn the whole writing counter-clockwise 45°? This way the letters will all be connected and the script is still nice and cursive.

How To Tell If Your Arabic Tattoo Is Correct?

Here are four articles to start you off: