Arabic tattoos are definitively in fashion in the world of the rich and the famous. And I don’t mean temporary tattoos done with henna. This is perhaps surprising, because there are hardly any tattoos to be seen in the Arab World. In the West, however, tattoos have come a long way from the time when they were essentially associated with sailors and soldiers. Nowadays, having a permanent inking on your skin is no longer a sign of low class.

Recently, celebrities like actress Angelina Jolie, football player Zlatan Ibrahimović, and pop star Rihanna have been getting Arabic phrases and words tattooed on their bodies. But, do they really know the meaning of the words they are eternalizing on their skin? Let’s take a look at the tattoos and their meanings:

Angelina Jolie: the firm will

First off is Angelina Jolie who it seems has already filled every inch of her skin with some writing or other. Her latest addition is this Arabic tattoo: 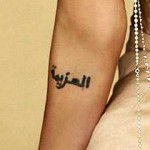 Taking a closer look we can make out the Arabic word العزيمة (al-‘azeema), meaning “the determination” or “the firm will” on her right forearm. Jolie certainly strikes me as a woman who knows what she wants – so it seems that this tattoo is quite fitting. However, the word can also mean “the incantation” or “the spell”.

While the Arabic script chosen for the tattoo is pretty plain, Angelina (or one of her assistants) has at least done enough research to ensure that the word is spelled correctly – no slipups here.

Moving on to Zlatan Ibrahimović, the top football player: 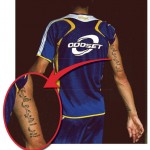 For those learning Arabic, the tattoo might be pretty confusing. Fear not, the solution is simple: the inscription is simply a transliteration of Ibrahimović’s surname – in Arabic  إبراهيموفيج (ibraaheemoofeedj).

Since the Arabic letters don’t correspond one-to-one with our English letters, the tattooist (or someone who speaks fluent Arabic) had to choose something that is as close as possible to the actual pronunciation of the name Ibrahimović. For example, there is no “v” in the Arabic alphabet. The next best thing is the “f” sound.

Maybe the egocentricity demonstrated by Ibrahimović’s choice of word is not to everyone’s taste. But, at least the tattoo is spelled and written correctly.

Finally, let’s see what singer Rihanna has engraved on her waist: 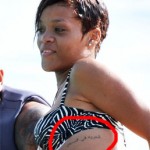 The Arabic reads الحرية في مسيح (al-horriya fi maseeh), or in English “the freedom in Messiah”. Huh? Seems like Rihanna is quite a religious one, but why hide the message of salvation in Arabic rather than show it off to her (supposedly) bigger English-speaking audience? Perhaps her religious convictions are more of a private thing for her after all?

Well, be that as it may. What is certain, is that the phrase should have read correctly الحرية في المسيح (al-horriya fi al-maseeh), or “the freedom in the Messiah”. Not all is lost, though, since there still is ample space to insert the Arabic article AL before the word Messiah. So, Rihanna, another visit to the tattooist?

\”Freedom in Christ\” in Arabic

If you want to follow the celebrities’ example and get an Arabic tattoo yourself, then make sure that you know exactly the meaning of the words you are engraving for life. Better yet, why not learn the Arabic alphabet yourself so that you can be sure that the words are written correctly?

Watch out for my next post to be published soon on embarrassing errors to avoid when you are getting an Arabic tattoo.

Get over 1400 sizzling hot and accurate Arabic tattoo designs

If you’re looking for accurate and unique Arabic tattoo designs, then check out my new Arabic Tattoos collection.

Update: The second article about Arabic tattoos is up.

Update: If you want to see some good examples of tattoo templates, check out my two blog posts where I fulfill reader requests: